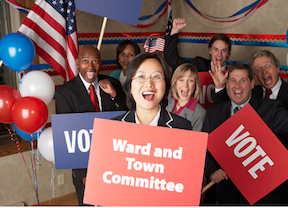 Let’s be clear, the Party’s future direction depends on the people who are active in it and, as we know, the Party is changing in state after state where progressives have taken leadership and  gained power. Now it is Massachusetts’ turn.

Please act to strengthen the Progressive Voice in the Massachusetts Democratic Party by becoming a Member of your Town or Ward Committee.

Our Revolution is committed to a Democratic Party capable of calling for and implementing a “Second Bill of Rights,” of asserting the Party’s activist role on behalf of progressive values, and a party that represents the interests of all people with fairness and inclusivity. To accomplish this we need to increase the involvement of progressives in the Party.

We know that this can work. Earlier this year, ORMA members and supporters succeeded in getting many Democratic Town and Ward Committees to formally support the call for a Green New Deal, which in turn directly contributed in ORMA’s success in getting the Massachusetts Democratic State Committee to support the Sunrise Movement’s demand for a climate debate.

Call To Action: We are asking ORMA members who were registered Democrats as of August 20, 2019 to get involved in this transformation by becoming candidates for their local town and ward Democratic Party committees. The process is outlined here:

The ORMA #DemTransform team can help connect you to others in your community interested in serving on their town or ward committee. If you are interested in being part of this effort to transform the Democratic Party please fill out this form and one of us will be in touch with you.

This is our chance to be sure that the Democratic Party in Massachusetts continues to adopt and implement progressive solutions to our nation’s most pressing problems. For further info see the Official Ward and Town Committee Brochure for 2020.