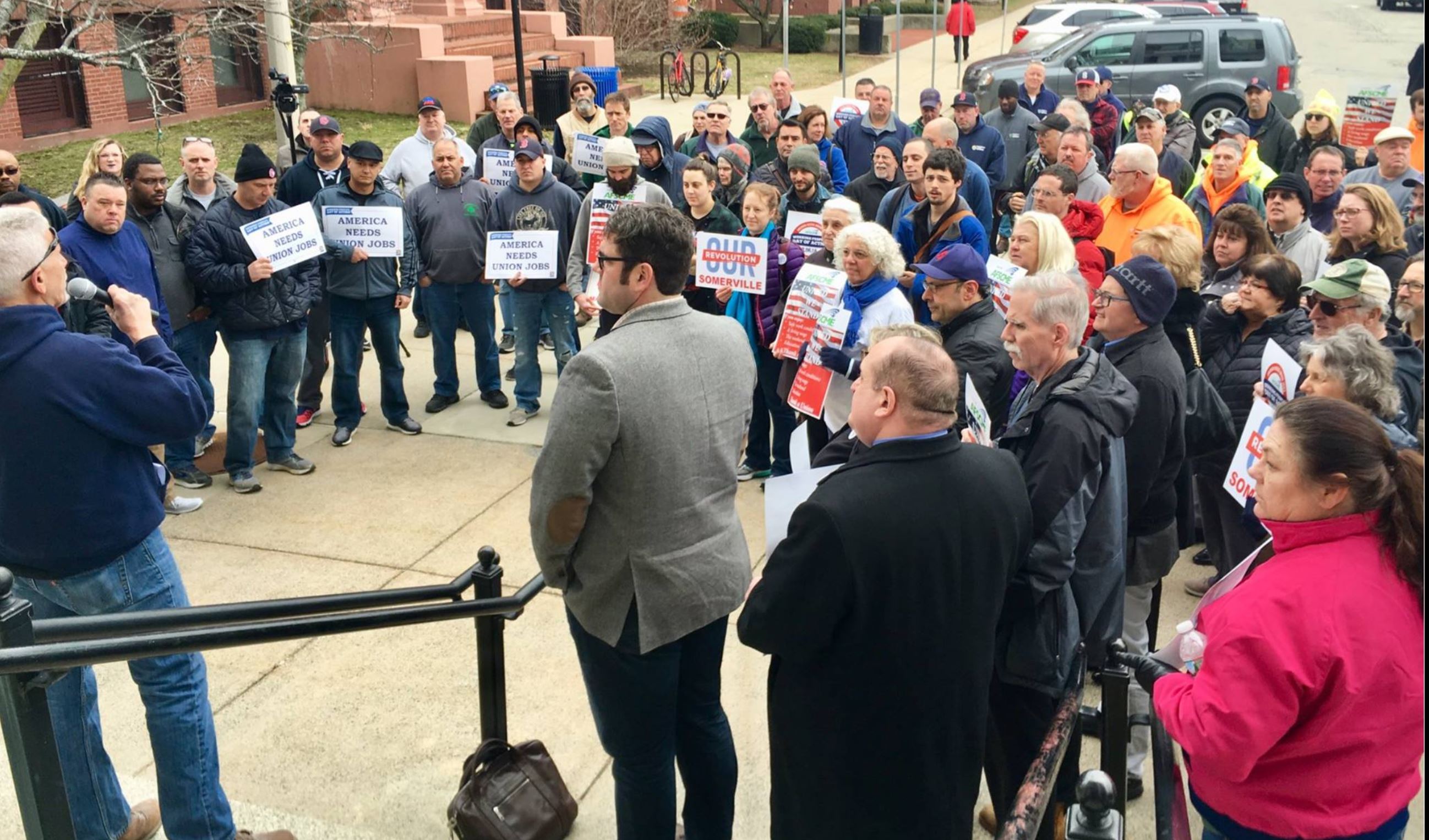 Our Revolution Massachusetts joined with workers for the #WeRise action pledge to stick together, demand that leaders fight to help more working people join together in unions

Somerville, MA — As the Supreme Court heard oral arguments today in the case of Janus vs. AFSCME, about 75 union members and their supporters gathered at Somerville City Hall to say that regardless of any Supreme Court decision they will remain united because Somerville’s workers need good, union jobs more than ever.

“The greedy billionaires and CEOs behind this case don’t want us to be united,” said Ed Halloran, President of the Somerville Municipal Employees Association. “They want to weaken our power, divide and conquer, so they can continue rigging the system against working people as they’ve been doing for decades. But we plan to stick together in our union no matter what. These are the same people who demonize union members simply because we have the right to negotiate safe working conditions and fair wages. This is an attack on the quality public services we provide.”

Today’s actions in Somerville were just one of the hundreds of similar #WeRise actions held by working people across Massachusetts and the entire country.

“I want working people in Somerville to know that I am against this attempt today to use the highest court in the land to further rig the rules of the economy,” said State Rep. Mike Connolly. “Instead of trying to make it more difficult for working people to use their power in numbers, we should be making it easier to join a union. I will do everything I can do to help Somerville workers join together in unions.”

“The attack by the Supreme Court on working people is also an attack on everything we are fighting for in Somerville,” said Rand Wilson, an organizer with SEIU Local 888. “We’re going to stick together, keep up the fight to help more workers unite in unions and work to improve wages and working conditions here in Somerville. We call on our elected leaders at every level to take action. For example, here in Somerville it’s long overdue that our laws for fair contracting, living wages, and against wage theft be updated and enforced.”

Participants at the event vowed to stick together no matter the result of the Supreme Court case and fight for even more good, union jobs that can provide financial security for families, strengthen communities and boost the economy.

Photos from the event are posted on Flickr here: https://flic.kr/s/aHsmdu2Fxc