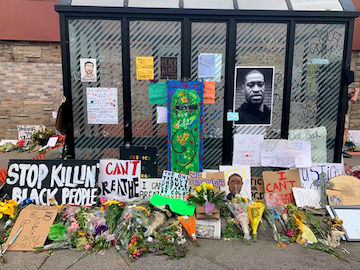 Our Revolution Massachusetts grieves with the family members of George Floyd, Breonna Taylor, and Ahmaud Aubrey. And we stand in support of all those who have taken to the streets to express their horror, their outrage, their pain and their anger at having to watch these horrific events play out again and again. As protests continue we encourage ORMA members to participate in any way they can and to do so safely, recognizing the continuing threat of COVID-19 and the dangers of confrontations with police.

The murder of George Floyd eight days ago was only the most recent in a long line of killings by police and other “legal” authorities. A line that stretches back 401 years. It is a murder rooted in America’s “original sin” of slavery, and the resulting social, economic, and political systems based on White Privilege. From the fugitive slave patrols in colonial America to the Minneapolis Police force, with its particular history of racist behavior, to the mass incarcerations of people of color, the story remains the same. It is NOT a story of individual “bad apples”, it is a story of institutional racism. The system isn’t broken, it’s working as designed! (See resources below for how to take action now.)

The protests that have erupted in the wake of this most recent murder, demonstrate that there is an emerging multi-racial and multi-generational force willing to stand up and say “enough is enough”. The thousands of people who marched in Boston on Sunday made an eloquent statement to that effect. A statement which now, just 72 hours later, risks being erased by the media’s repeated focus on the violence that took place later on Sunday. We should remember the words of John F. Kennedy “Those who make peaceful revolution impossible, make violent revolution inevitable.” It has been pointed out elsewhere (Craig Altemose, Better Future Project email to members), that, as Colin Kaepernick and others have shown time and again, peaceful efforts calling for reform are met with scorn. Even as we reject the efforts of some to use violence to advance their own personal agendas, we remember that black people were treated as property for hundreds of years, a crime they have never been compensated for. For political leaders and media pundits to focus now on property destruction is to miss the point.

There are many public policy steps that must be taken, beginning NOW, to bring both personal and systemic change. We stand at a crucial juncture. As talk of “returning to normal” in the wake of the COVID-19 pandemic grows, we should be asking ourselves “what is normal?” Normal has given us institutional racism. Normal has given us a health care system fraught with racist outcomes. Normal has given us a law enforcement system that routinely murders black men and women. Normal has given us a militarized police that has all the masks it needs while nursing staff have to make their own. Normal has given us a legal code that protects hospital and nursing home owners from liability while patients suffer the outcomes, and a legal doctrine of “qualified immunity” which shields law enforcement officials from being held accountable for the use of force. We encourage all ORMA members to pressure their elected representatives to take appropriate action. We demand accountability amongst the police force, we believe nobody is above the law. The Center for Popular Democracy has provided a list of 15 important steps your city can take here. We also encourage members and supporters to recognize that the ballot box remains an important tool. Trump, enabled by the Republicans, ended the Obama era prohibition of selling surplus military weapons and material to local police forces. Trump, enabled by Republicans, is calling for army troops to be mobilized in the face of protests. Ending his presidency may be one of the most immediate steps we can take to protect people of color.

But treating the policies of Trump and his cohorts as the work of outlaws and replacing them with elected officials of goodwill (as we must) will not be sufficient to change a culture. Those of us who are white have a special obligation if we intend to be real allies in this struggle. White people must learn to see these events through the eyes of people of color, and to come to grips with our white privilege and how it benefits us and allows us to see these injustices as only happening to “others”. The Industrial Workers of the World (IWW) slogan “An injury to one is an injury to all” should define our world view.

There are multiple resources available for educating ourselves, this article from Sojourners magazine has good suggestions for how to be an effective ally to people of color and resources for growing our personal understanding of oppression. Showing Up for Racial Justice (SURJ) developed a curriculum for political education, and our allies at United for A Fair Economy (UFE) shared this list of resources. Please consider following Bernie’s lead and make a contribution to these organizations; this link will split your donation between the Minnesota Freedom Fund, Movement for Black Lives, Poor People’s Campaign, and the Center for Popular Democracy, organizations on the frontlines fighting for racial justice.

Finally, these issues apply to ORMA as an organization as much as they do to each of us as individuals. On Saturday at our General Assembly, we held a robust discussion about what we need to do as an organization, and more than one member pointed out our deficiencies in how we handle and address issues of race, organizationally and politically. Going forward, what steps should we be taking to change? This will be an ongoing dialogue.

No single elected official, no specific policy, no one organization will change the epidemic of police violence and institutional racism alone. Bernie understood this when he challenged us to be part of the movement for change. Now we must challenge ourselves to take the steps needed to be part of the solution.

In solidarity
The ORMA Coordinating Committee