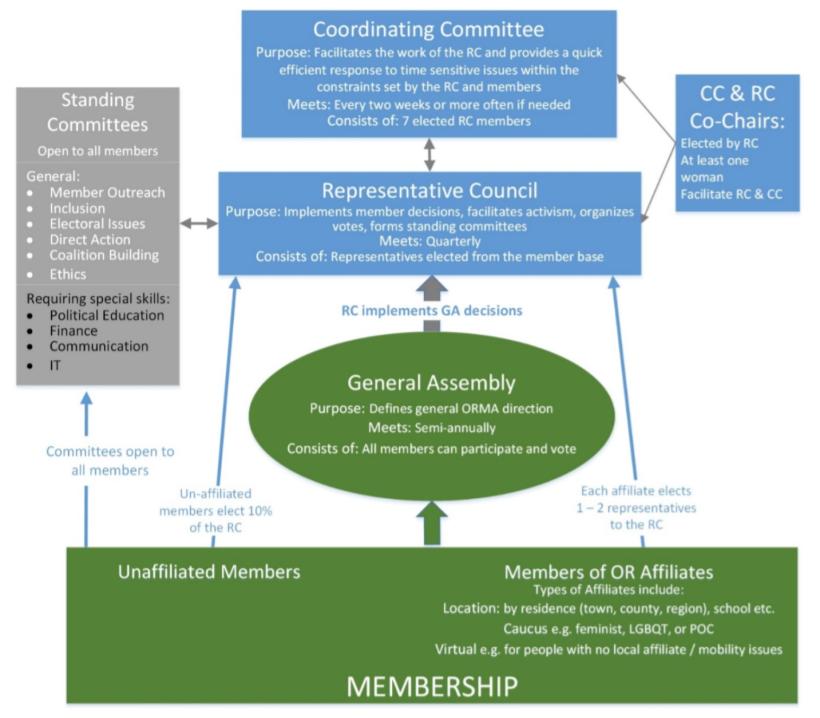 A new organizational structure and new leadership will be the focus of a November 12th Ratification Congress to be held at the Quincy SEIU Hall, 108 Myrtle Street, Quincy, MA 02171 from 10:00 am to 3:00 pm.​  Register here to attend. You must be a member of ORMA to vote.

The Representative Council Model was selected by the TT for presentation to the ORMA membership, and is now open to amendments, via a Google form and process defined by an Election committee. The deadline for submitting amendments is 5:00 pm on November 9th, 2017.

Once the model has been ratified by ORMA members at the Ratification Congress on November 12, grassroots leaders to fill organizational roles will be elected in ORMA affiliates, caucuses, and by the full membership. With this congress, ORMA is establishing a democratic, inclusive, diverse leadership structure.​

The Interim Coordinating Committee of Our Revolution Massachusetts (ORMA) tasked its Mission, Structure and Planning Working Group to form a Transition Team to create a new democratic, transparent, and inclusive organizational structure for ORMA and to convene a Ratification Convention.  Forty-eight members were selected from among affiliate OR groups and at-large candidates, and these met on July 29th to begin the process.  Read more: ORMA Transition: The Back Story.

The meeting began with a discussion of whether to admit a fourth model (“Transitional Year”) for consideration.  Inasmuch as this model was submitted after the revision deadline and without a review period, the Transition Team voted not to consider the proposal.

Introducing the Program team’s work, Abida Adnan presented a draft agenda for the Ratification Congress. An hour was allocated for amendments, which some felt inadequate and will be reconsidered by the Program Team.

Anosha Siripala and Jeannette Rivera presented the work of the Inclusion Team seeking to empower people to be involved in ORMA and serve as representatives of minority caucuses that would be given ORMA affiliate status.

Lesley Phillips and Kevin Costa presented the Shared Leadership model. See the meeting record for a complete overview of the debate and comments. The governing council is a single body of people holding representative positions drawn from different groups. Two members would be chosen by each ORMA affiliate, and a matching number of assembly members (of whom 80% would NOT be members of affiliates) would be voted in by all ORMA members.  Exerting leadership over this governing council would be a steering committee, half of whom drawn from the affiliates and assembly councils. Through this model, affiliates and general members have equal representation. Vicki Dzindzichashvili followed with a model that favored grassroots organizing thorough affiliates as a condition for statewide leadership, although specialized committees would be open to all ORMA members whether affiliated or not. All ORMA members participate in a biannual general assembly to make policy decisions, but the ongoing work would be done by a council of mostly affiliate representatives.

Affiliates are valued not only for their organizing work, but because they are natural sources of community, promoting social connection and shared understanding through face-to-face group discussions.  Quick responses to time-sensitive needs are provided by committee chairs and a direct action committee. Each of eight regions would sends three representatives (one from an affiliate, one unaffiliated, and one from an underrepresented group) to a state council, joined by a five-member advisory board of allied organizations. This model addresses the danger of a decisionmaking assembly based on affiliate representation becoming unmanageable as many new affiliates came on board, or existing ones split.

Before the debate over the three models, it was agreed there will be an amendment process where all ORMA members may participate.

Discussion of each of the models followed.  All attending members of the Transition Team participated, raising questions and sharing comments. Issues of top-down versus bottom-up decision making, respect for structure and culture of affiliates versus fabricating new statewide organizations, and the inclusion of minority and non-affiliated representatives were all explored. Visit the meeting notes for more.

The meeting closed, followed by two days for clarification and ranked choice voting.  With one model chosen, there would be amendments, via a process yet to be defined by the Coordinating Committee and appointees.

Of 48 total eligible voters on the Transition Team, 42 voted. The Representative Council model earned 25 first-rank votes, a clear majority in the first round without requiring instant runoff.

The CC appointed an Elections Committee, responsible both to implement the model amendment process and to handle ORMA leadership elections after the Nov 12th Ratification Congress.  In addition to the four  CC members, the committee chose Abida Adnan, Jeannette Rivera, Anosha Siripala, Freeman Stein, and Michael Gilbreath to join in the discharge of its duties. The Representational Model is now open to amendments, via a form and process defined by that committee.