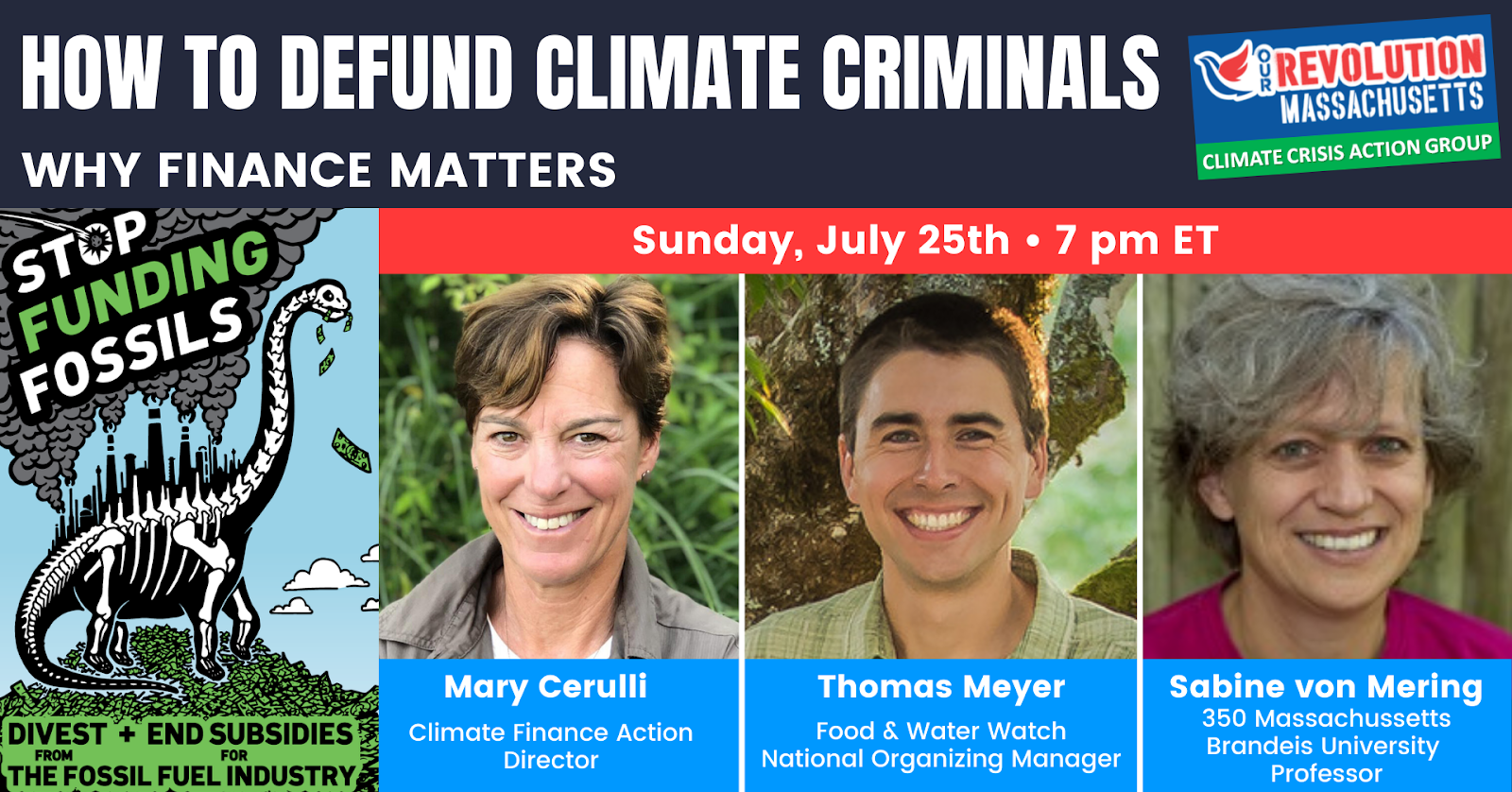 From fighting to use the power of trillions of dollars in state pension investments, to ending billions of dollars in federal fossil fuel subsidies, to standing with frontline Indigenous communities against Line #3 and its flow of deadly Tar-Sands Oil in Minnesota, activists are taking bold and important steps to Stop the Public Money Pipeline that fuels the climate crisis.

We will hear from activists and legislators about why high finance is as important a battleground as civil disobedience that stops construction of the actual pipelines. Climate Finance Action is working to divest public pensions in 13 states from fossil-fuel companies. OR National, and Food and Water Watch, and a coalition of partner organizations are working with legislators to end federal subsidies that amount to corporate welfare for the fossil fuel industry. And members of 350Mass and a coalition of organizations have joined in recent, frontline civil disobedience actions to Stop Line #3 in Minnesota.

Join us at the forum to find out what simple things you can do to support these crucial actions to fight the Climate Crisis, and learn more about ORMA’s plans for further action to Stop the Money Pipeline! You can learn more by contacting climate@ourrevolutionma.com)

“We need to keep fighting to act on the climate. There is no other option—there is no planet B.” – Congressman Jim McGovern

Check out this great article from The Guardian newspaper. It will cheer you up. Over its long history, environmental activism has had a lot of successes! ‘We’ve had so many wins’: why the green movement can overcome climate crisis – The Guardian

Global climate change is real. Climate change is the single greatest threat to our survival. If we do nothing, we will see sea level rise and melting glaciers cover Boston, New Bedford and most of Cape Cod.

The Green New Deal is a Congressional proposal that would require the United States to plan and execute a bold, comprehensive strategy to respond to the escalating climate crisis, with the urgency demanded by the problem as outlined in the most recent report of the United Nations Intergovernmental Panel on Climate Change (IPCC), the United Nations body for assessing the science related to climate change.  (See a condensed version of the IPCC report.  Read the full text of the Green New Deal.)

Our Revolution Massachusetts (ORMA) supports passage of the Green New Deal (GND) and legislation that will move Massachusetts and the US towards 100% renewable energy by 2030 and to offer subsequent generations of humans and animals who share our environment a viable future on a planet with clean and available natural resources.  We believe this effort will put Americans back to work with well-paying jobs and will initiate a wave of prosperity that will benefit all.

Climate change is an economic issue; its effect on clean air and water quality make it a public health problem; its role in exacerbating global conflict and terrorism makes it a national security challenge; and its disproportionate impacts on vulnerable communities and on our children and grandchildren make it a social justice issue. People who live in low-income and minority communities will bear the most severe consequences.  We must solve this problem before it’s too late.

ORMA calls on all Green New Deal supporters to lobby their Representatives at the State and Federal level to co-sponsor and support Green Legislation such as H.R. 9 Climate Action Now Act and GND Resolutions.

To get involved with the Green New Deal outside ORMA see:

To learn more about the ORMA GND Working Group, or to let us know what you are doing, have done, or need help doing as it relates to the Green New Deal, check out ORMA’s GND Facebook Page or email us at info@ourrevolutionma.com.