August 30th Members of Our Revolution MetroWest and Our Revolution Arlington met with Wade Blackmun from Rep. Katherine Clark’s staff and presented him with petitions in support of the #PeoplesPlatform.

The #PeoplesPlatform is a Summer for Progress effort to hold our representatives accountable to a series of 8 bills that confront all Americans.  Mr. Blackmun agreed to deliver the petitions that contain 450 signatures from constituents who live in the 5th Congressional district to Representative Clark —-and ORMA noted many more people were expected to sign the petition in the coming weeks.

ORMA members thanked the Representative for her leadership and urged her to add her voice and leadership to the remaining 2 bills that make up the platform:  H.R. 1880: College for All Act, and H.R. 2242: Keep It in the Ground Act 2017.

Mr. Blackmun assured the group of Rep. Clark’s commitment to improving the affordability of higher education and to taking the steps necessary to address Global Climate Change, and promised to take the petitions, and request for the Congresswoman’s support, directly to Rep. Clark.

The meeting ended with members calling on Rep. Clark to show the same leadership on the #PeoplesPlatform as she did when she helped lead the House sit-in on Gun Violence with Civil Rights Hero, John Lewis.

August 23rd Members of local Our Revolution Massachusetts groups in Congressional District 7 met with Congressman Mike Capuano in his Cambridge district office to discuss the #People’s Platform and to ask for his support of the bills in Congress that closely reflect the positions and values of the Democratic Party platform achieved at the July 2016 Democratic National Convention.

Rep. Capuano has already signed onto: HR 676 – Medicare for All, HR 15 – Raise the Wage, and HR 771 – EACH Woman Act.  The Congressman shared his positions on the remaining four People’s Platform bills in Congress that he has not yet signed onto: HR 1880 – College for All, HR 1144 – Inclusive Prosperity Act, HR 2840 – Automatic Voter Registration Act, H.R.3227 – Justice is Not For Sale Act. Rep. Capuano said he would support the Justice is Not For Sale Act and reconsider supporting Automatic Voter Registration.

The Congressman was thanked for his support on the above bills and presented a petition signed by over 300 CD7 constituents in support of the People’s Platform. 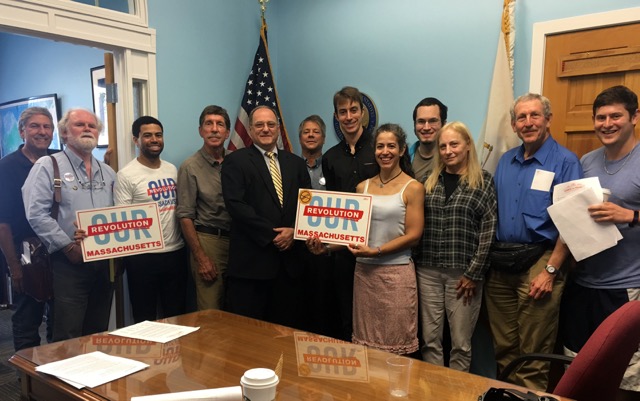